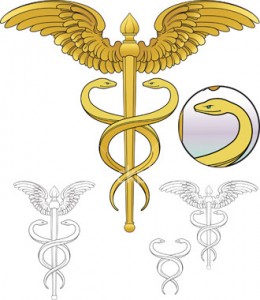 In the beginning…..” “Once upon a time…..” these are the beginnings of all good stories and this is a great one. Hermes Trismegistus told this story, and while we don’t know exactly who Hermes was, theories range from an Egyptian priest-god trained by Atlanteans, to the priest-god who taught in Egypt when Moses was a boy there, to simply a wise Egyptian priest. The writings we call Hermetic are really written by many of the original Hermes’ students over centuries of time. In them, you will recognize many of the stories of the Bible, including themes from both the Old and New Testaments.

So….. In the beginning, God created Mind. Mind created the seven planets and set them spinning in their orbits. These planets were called “Governors of Destiny” and were given powers to rule over the destinies of any being within their orbits. But God, and Mind, were outside the spheres of the planets. Then God decides on another creation and he creates First Man. To be politically correct, we could call this the “Spirit of Humanity”, as this so-called First Man was both male and female, was created in the image of God, and was composed of air and fire.

The newly created “Spirit of Humanity” (First Man), takes a look around and sees that his brother has become a creator of the planets. First Man wishes to be a creator also, and asks God who says, “Sure, kid. Give it a go! See what you can do!”. First Man, no dummy he, figures he better check out his brother’s creations, so he goes on a grand tour of the planets.

So First Man enters the boundaries of Saturn. Saturn, astrologically, represents limits, boundaries, the
material world as opposed to the spiritual world. Because Saturn represents materiality, it also represents Time, which cannot exist without matter. Because it represents limits, Saturn is seen as the Stern Taskmaster, who lets us know when we have gone beyond acceptable limits. Saturn is also associated with the entry of spirit into matter, and indeed, this is where the “Spirit of Humanity” first entered the spheres of the planets.

Now, the planets had not been given the gift of creativity. They really wanted it and may have been a bit jealous of First Man’s ability to become a Creator. They decided they would participate in the Creation planned by First Man, so as First Man was passing through the planetary spheres, each planet gave him a little piece of itself. Each planet implanted into the Spirit of Humanity a little bit of its own energy, a little piece of its own ego, its own agenda, in order to be able to take part in creation.

As First Man traveled into the center of his brother’s creation, he next passed by Jupiter, the son who supplanted his father, Saturn. Jupiter is the giver of laws, the giver of bounty, the principle of expansion. Then First Man passed by Mars, the planet named for the God of War—the planet ruling aggression, action of all kinds, the planet of desires, of sexuality. The Spirit of Humanity now carried with him a little piece of Saturn (Time, Limits, Boundaries), Jupiter (Laws, Bounty, Growth), and Mars (Action, Aggression, Desire).

Next came the Sun, whose light was so brilliant that the Spirit of Humanity almost became lost in its radiance. Truly, this brilliance represents the deepest spirit of selfhood, but the little piece that Sun slipped into First Man’s nature is sometimes only enough for pure egotism. And so First Man first gained the ego that would serve to individuate him, but could also confuse him. The next planets First Man passes serve to reinforce the egoic nature and create more attachments for his final creation: humanity.

The planet Venus’ magnetic attraction drew him in, seducing the Spirit of Humanity with promises of Riches, Love, Worthiness, and imparted a bit of her magnetic energy and her promises of material joy. Then came Mercury, the fast-moving trickster, the thief, the principle that can keep our minds moving like gerbils in caged exercise wheels. Mercury is the principle that makes us clever, calculating, busily juggling the millions of thoughts and details in our lives. It is the principle of movement, change, curiosity (the same curiosity that “killed the cat”). If you have any doubt that this principle is a trickster, try stopping the movement of your thoughts in meditation, or try going to sleep when you have a “million things on your mind.” Mercury is quite clever in slipping in where he’s not wanted, and Mercury slipped a bit of its own ego into the Spirit of Humanity.
At last, First Man reached the Final Boundary, the sphere of the Moon. And as First Man passed through the orbits of each planet, he became less and less conscious of the God-space (Seventh Heaven) and more desirous, curious, and attached to the experience awaiting him. The distractions of each of the planets added, one to the other until First Man’s remembrance of God was only a dim image in his awareness. Finally, once past the boundary of the Moon, First Man saw Nature.

Nature was neither male nor female and was composed of Earth and Water. So now we see Fire and Air, containing the principles of male and female but being completely Spirit, unable to separate into male and female, meeting Nature, who has no gender, but who is Matter! Earth and Water are material. They are the physical building blocks of the physical human being. In the zodiac, half the signs are air and fire and are considered masculine, or active. The other half are earth and water and are considered feminine, or receptive. And humans are created from the mixing of both Spirit and Matter.

There are several important secrets in this last stage of First Man’s journey. Hermes goes on to say that, in order to return to God, humans must travel back through the spheres of the planets after death, giving back to each planet that which was given to him. But in fact, most humans do not return directly to Seventh Heaven. We are trapped in a reincarnational cycle, returning to physical bodies on earth time and time again. To see why, we must first look to the role of each planet…and the first planet we encounter on our journey back to Seventh Heaven is the Moon. (Click HERE to read the Moon’s role in this story.)

previous
Astrology the Cosmic Clock
next
The Dance: Chiron/Neptune/Pluto/Jupiter